He sat on the plastic chair facing the television. His slanting posture is what had made me notice him. I didn’t expect him to recognise me. But he looked up and started smiling. That smile had the effect of a scalpel piercing through my heart.”Amma enge?” I managed to ask him where his mom was. He pointed towards the bed at the corner of the ward. I saw her smile at me. It was too much. I had to leave.

It was 5 months back. On a usual busy OP day, that mother had brought him to me. His complaints were very vague. He was having this very weird posture of hands and slurring of speech. But if you tell him not to do so, he would be able to stop himself. Hmm..now thats vey weird. I examined him thoroughly…did all the CNS examinations..all I knew, I tried.(Mind u, I didnt think abdomen was that important, so i just simply felt it, not examining in detail.) At the end of my examination, I didn’t get any positive findings and I wanted to label him “functional”. But his mother insisted that something was really wrong with her son. Since I was not very sure, I decided to  ask my consultant. Sir examined him and his findings resonated mine. But he felt we should keep the boy under followup. We sent him home on multivitamins and asked the family to follow up. He came back after 2 weeks. This time his mother was really distraught. His symptoms had worsened according to her. So Sir asked them to get an MRI done. A few days later they returned with the MRI report. When sir saw the report, he just sat back and took a deep breath. He examined the child again. And then he called me and my fellow junior doctor. He told us to examine his eyes properly. We did. And there it was! The classic KF ring! Then I palpated his abdomen again…this time in the proper position. And voila! He had hepatomegaly. Then Sir showed us his MRI report..the findings were suggestive of Wilson’s disease.

Within the next 2 months, he started to deteriorate. We referred him to a reputed higher center. He was started on all the available treatment. But there was something the parents were warned of- the chances of their son leading a normal life may be bleak. It was hard. But they have come to terms with it. So has he.

He was now admitted with an ear infection and was getting discharged.  I watched as his mother was struggling to get him into a pair of pants. And I had thought he was functional! Good lord! I still haven’t been able to forgive myself. What if I had examined his abdomen thorougly…or what if I had this sudden idea to shine the torch into his eyes?? Maybe I would have figured it out. I knew I had to cut myself some slack. There was no way I would have diagnosed Wilson’s disease on just finding a hepatomegaly. And its not possible to examine the eyes of every child in front of you in a busy opd. Plus, his disease had already progressed….I was reasoning with myself as I watched his mother help him to walk towards the nurse’s station where I was seated. He was coming to see me. But I suddenly had this urge to run…away from his innocence; the question of why this had happened to him; his  mother’s smiling  face which was doing a terrible job in masking her sorrows….away so that my tears may not stain the IP  chart in my hand….away so I don’t have to think of this wilting flower. 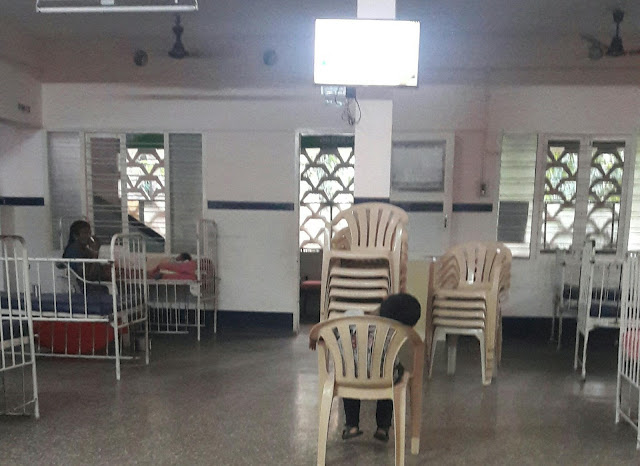 Nothing but a recipient of Christ's grace. I am a young doctor and I use this space to find meaning in the bedlam of my thoughts. My blog might resonate with the screams of a young adult finding her place in life, the stench of hospital corridors, images of the many people who intrigue me and the lessons my Saviour Jesus teaches me. View All Posts