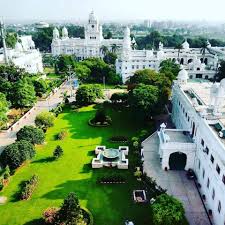 The morning sun was trying hard to steal my sleep. I pulled the sheets over my head, in a vain attempt to hide from him. Hide from his sinister burning self that will be revealed in a few hours. Hide from my new pattern of life. Hide from life. I yearned to stay safely tucked away from the strange new world outside my window. My new world for three years. Lucknow. “Nawabon ka Shehar”(The city of Nawabs).

I have been here for a fortnight. And the feelings are quite a crazy weave. Excitement was the initial sentiment. It was this stupid streak of excitement that managed to kill those terrible fluttering butterflies in the tummy as I boarded the flight from Kochi. But after a fortnight, a tinge of homesickness is blending in with the excitement. I tried to put if off as I managed to get out of bed.

This has definitely been an experience! The architecture is mesmerizing. The KGMU campus is truly a pleasant treat to the eyes. The white buildings with its archetypal architecture surrounded by  the lush, well maintained greenery definitely helps to cool your spirits despite the blazing sun. Situated in the older part of Lucknow, the place reflects a mixture of both the best and the worst. The university is ranked one of the best in India. It is a brand name in itself. The campus is huge and well maintained. But once you reach the hospital wards, you will come face to face with poverty and sickness. People sit on the ground around the hospital as comfortably as on a couch. You will also find some sleeping on the ground. Children run around in torn clothes with absolute disregard for the heat. The sight of one tiny tot crouching revealed his rib cage with such clarity that you could count his ribs and vertebra. The poverty is shocking.  And humbling.

Outside the campus, life is quite a pandemonium . Transport is unbelievably cheap around here with rickshaws of all sizes, colors and shapes. The air resonates with the declarations of the rickshaw -walas on the places they could take you to.  Street vendors with a variety of items line the streets. Crossing the street seemed like an herculean task on the first day. I waited for nearly five minutes, hoping to cross like a normal, law abiding citizen. But soon I ditched that idea and simply walked into the street like everyone else around me was doing. Traffic rules are something next to non-existential. Everybody goes their own way and somehow nobody seems to have a problem with it. I swallowed hard at the thought of driving in this city.  Chewing paan masala is quite the fad here. It is true that the red paan filled mouths disgust me. But what gets on my nerves even more is when they decide to spit! On the roads. On the footpath. Almost on my foot (It sure was a close call!). I would love to punch people on the face for spitting on the roads or maybe give them a piece of my mind. But in reality. I just walk faster,the look of disgust hidden behind the scarf I have tied around my face.

Anybody will tell you not to miss three things in Lucknow- the architecture, chikkan embroidery work and the Kebabs. None of the three have been disappointing. Also,Lucknow sure has no scarcity of parks. Whichever corner you turn onto, you will find a park. And most of them are well maintained. But the better part is that people make use of them. When a sudden wave of fitness mania hit me, I decided to go for a jog. I was really surprised to find that the parks were quite full even at five thirty in the morning. Then there are the statues. Gigantic statues of many important people have been erected at various nooks of the city. It is true that I am not a fan of statues and would have considered the government wiser if it had used that money on improving the life of the common folks,but I do appreciate the artistic minds behind them. The city proper, though a little away from our campus, hosts every brand and facility you would want. And then there is food. It took my taste buds a few days to adjust to the new spices and the excess salt. But now I have come to enjoy it. The scarcity of non-vegetarian food in the campus is definitely disheartening. But since it is available in surplus outside, life is possible.

Now to the people. They say that the people you encounter will make or break your impression of a place. By the grace of god, the people around have been good. When your features are like an invisible banner which declares “South Indian” in bold, it is quite normal I guess to get those stares and hard looks at times. But on the whole, folks do try to understand, accommodate you and make sure you feel alright. Also, I have been blessed with some amazing people at my department who have been making sure I feel at home.

On the whole, the new experience has not been too terrible. God has been leading me faithfully. And Lucknow has been treating me quite well. It has enriched my perspectives on life, culture and people. There is a new angle to view things at. And from this vantage point , I see that I know so little about life. It strikes me that I am such an amateur at deciphering this mess nicknamed life. But one day I hope to look back on this experience and say- Veni. Vidi. Amavi (I came. I saw. I loved)

Nothing but a recipient of Christ's grace. I am a young doctor and I use this space to find meaning in the bedlam of my thoughts. My blog might resonate with the screams of a young adult finding her place in life, the stench of hospital corridors, images of the many people who intrigue me and the lessons my Saviour Jesus teaches me. View All Posts